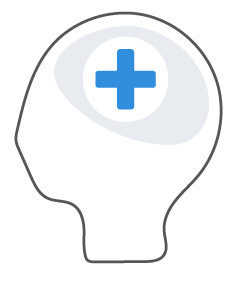 Dementia is a descriptive term for a collection of symptoms that can be caused by a number of brain disorders. It is a progressive, degenerative brain syndrome that affects memory, thinking, behavior and emotion. Dementia is NOT a part of normal ageing.

The causes of dementia may include certain medical conditions,

post-substance abuse or a combination of both. In developed countries Alzheimer’s disease accounts for about half of all cases of dementia.

Alzheimer’s disease: In this condition, a biochemical change occurs in the brain, eventually resulting in loss of brain tissue. The onset may be slow initially, but then it is followed by steady acceleration to a rapid deterioration. Alzheimer’s disease is not reversible, but some medications can slow its progress.

Here, the brain develops multiple small areas of dead tissue as a result of blockages in small brain arteries. This is more common amongst those with a history of high blood pressure, strokes, smoking or alcohol abuse. Treating these conditions can slow the progress of vascular dementia.

Symptoms of dementia vary considerably and depend on the individual and the underlying cause. Usually the first sign of dementia is short-term memory loss. Other symptoms include mood changes, communication problems and feeling sad, frightened or angry.

AS DEMENTIA BECOMES WORSE, SYMPTOMS BECOME MORE OBVIOUS AND MAY INCLUDE:

Those with severe dementia may be unable to perform basic activities of daily living, recognize family members or understand language.

The treatment of dementia depends on its cause. Treatment will focus on delaying the onset of the disease and slowing the progress. Developing new treatments for Alzheimer’s disease is an active area of research.

Non-pharmacological treatment should be implemented prior to attempting drug treatment. This involves psycho-education and support of the caregiver, establishing a safe and familiar routine for the patient, helping the patient with daily activities and keeping him/her occupied.

Drugs to specifically treat Alzheimer’s disease are now available. These drugs will not cure the disease or reverse existing brain damage, but they can improve symptoms and slow the progression of the disease. This may improve a person’s quality of life, and delay admission to a nursing home.

It may also be beneficial to caregivers as it will ease their burden.

CALL YOUR HEALTHCARE PROVIDER IF: