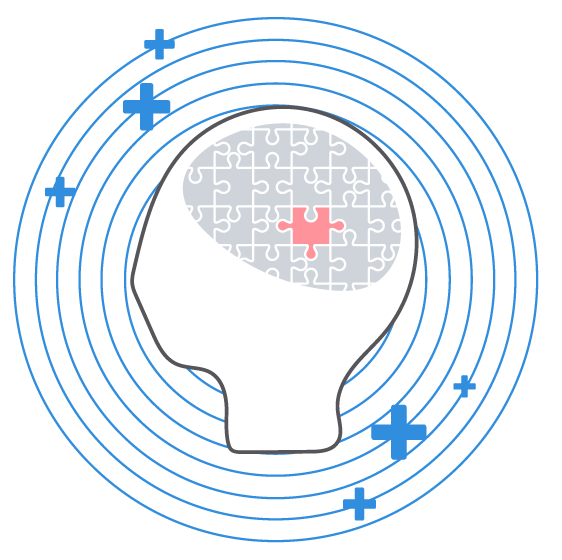 Most of us have experienced some kind of traumatic event. Usually with time, the emotion related to the event decreases. However, there are a number of individuals who fail to escape the experience of a traumatic event, and remain anxious and severely distressed for extended periods of time. These people might have what is known as post-traumatic stress disorder (PTSD). PTSD is a serious and often debilitating condition that can occur in persons who have experienced, witnessed or heard of a traumatic event involving themselves or a significant other.

Traumatic events can include, but are not limited to, the following:

THE CORE SYMPTOMS OF PTSD ARE:

WHEN IS PTSD DIAGNOSED?

PTSD is diagnosed if the abovementioned symptoms persist a month or longer after the traumatic event has occurred.

It is common that before seeking help, someone suffering from PTSD would have experienced a multitude of symptoms that would ultimately lead to a formal diagnosis. Often, however, symptoms do not present until several months or years after the trauma. This is known as delayed onset PTSD. In cases where symptoms have lasted 3 months or more, the PTSD is termed “chronic”.

PTSD is a medical condition that potentially affects people of all ages and from all social and economical backgrounds. Due to the high rates of violent crimes (physical and sexual assault, hi-jacking, domestic violence) in South Africa, a diagnosis of PTSD is relatively common amongst the population. Importantly, not everyone who is exposed to trauma will develop PTSD. In data obtained from youth and patients attending clinics, rates of PTSD as high as 20% have been reported. Women are almost twice as likely as men to develop PTSD.

HOW DOES PTSD AFFECT DAILY FUNCTIONING?

For someone with PTSD, mentally re-living an event can be as traumatic as the actual event. Physical and psychological symptoms that go hand in hand with such experiences are worsened by feelings of embarrassment, confusion and frustration. Despite being a disorder characterized by very specific symptoms, it can be misdiagnosed.

Living with untreated PTSD can place significant strain on relationships, as persons with PTSD will withdraw from normal social and interpersonal activities. PTSD often co-occurs with depression, substance abuse or other anxiety disorders.

Antidepressants are commonly prescribed for PTSD. Medication is most effective in combination with psychotherapy. Medication will act to relieve symptoms of PTSD, thus making the person more susceptible to techniques used in psychotherapy.

The therapeutic environment (whether group or individual treatment) provides a safe place for persons with PTSD to discuss traumatic events, and express the fears and reactions associated with it. Most persons who seek treatment ultimately enjoy a better quality of life. However, it is important to remember that treatment response varies and what may work for one person may not necessarily work for the next.

There is some preliminary evidence to suggest that starting with treatment (medications and/or psychotherapy) within a short period of time after a traumatic event may prevent the onset of PTSD, but further work in this area is still needed.